Okra Playground was formed in 2010 from a shared wish to bring together excellent people and musicians to play around traditional Finnish music with a fresh approach.

On this musical playground the kantele and bowed lyre create new, exciting symbiosis with modern instruments and three strong voices. Okra Playground’s music has roots deep in the Finnish soil, but its tallest branches spread out towards the furthest shores of world music.

Okra Playground has released three albums and several music videos and the band has toured in Europe, Asia and USA.

Okra Playground is based in Helsinki, capital of Finland. Finland is located in Northern Europe and it’s part of Nordic countries. Finland is known for its pure nature, cleanest air in the world and four different seasons. Finland covers an area of 338,455 km2 (130,678 sq mi) with a population of 5,5 million people. Official languages are Finnish and Swedish. Almost all students in Finland also study English as a first foreign language.

If you drive from the most southern point of Finland (Hanko) to the most northern point (Nuorgam), it takes over 16 hours in one drive.
If Finland was in the USA, it would be the 5th biggest state between Montana (147,042 sq mi) and New Mexico (121,589 sq mi.)
Finland has the most heavy metal bands per capita in the world.

Finland is also known as “the Land of a thousand lakes.” Finland has over 180 000 lakes, and Finnish people love swimming and sauna. It’s estimated that there are 2-3 million saunas in Finland, which is about the same amount than passenger cars in Finland.

Interview with the musicians

Click for more info about the player and instrument! 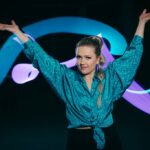 Kantele is Finland’s national instrument. It is a plugged string instrument usually played with fingers. There are many sizes of this instrument from 5 string small kantele up to 40 string concert kantele. With Okra Playground I play 15 string kantele my father has built for me. It is a combination of traditional and modern kantele models. I also use a plectrum when playing and accompaning with this kantele type. 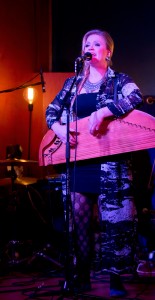 The first time I played kantele I was 3 years old in kindergarten. Later I wanted to play some instrument in a music school and kantele was a very good option because I had lost my left hand pinky finger when I was only one year old. When playing kantele you don’t need that finger so much – luckily :) My teacher was a folk musician and so I fell in love with traditional and folk music right away. Usually almost all kantele players also sing because it is easy and natural to accompany yourself with kantele, like how singer-songwriters do with singing and playing guitar. I play all kantele types and I’m also working together with my father with instrument building and design. He is a luthier. 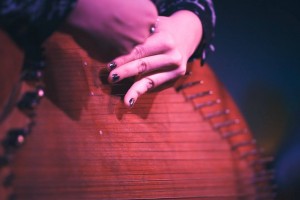 I love inventing new playing techniques and developing the instrument with my dad. Using kantele in a band is a quite new thing in Finland. It is very inspiring to play with other instruments and other people and try out what kind of things and sounds you can invent and play in an ensemble. 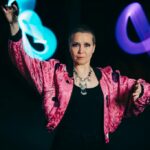 Fiddle is the word for violin in the folk music genre. The instrument is the same but the word ”fiddle” indicates the tradition and different way of playing the instrument than in classical music. 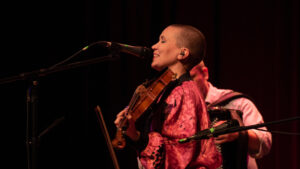 Jouhikko (the bowed lyre) is a member of the lyre family, which has a history going back thousands of years. Oldest evidence (north of the Alps, Hungary) is from 800 and 500 BC. There is a theory that the Celts spread the lyre from the Danube to the British Isles about 1000 BC and from there it spread all the way to Denmark region and later to the east and Finnish Karelia. Plucked lyre was played by the southwestern Finns at the beginning of the first century and the use of the bow came in medieval times. Jouhikko was used as a dance instrument (also together with kantele) and to accompany songs. Musicians played as long as the dancers danced, hours and even days. That’s why improvisation is the key element in old jouhikko music. 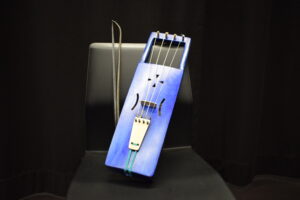 I started to play violin when I was 5 years old and I played both classical and folk music. I started to play violin because all my siblings played different instruments in music schools and it was very natural for me to follow their footsteps. Violin was the most interesting instrument for me back then. By the time I was about 25 I started to concentrate on folk music, and fiddle and jouhikko became my main instruments. As a fiddler player it was very easy to start playing jouhikko because both instruments use the bow.

Their versatility. You can use them in solo playing or in bands and you can get many different kinds of amazing sounds out of them. I use both instruments at the same time while I sing so you can create your own musical world with just a few instruments. 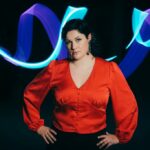 The kantele as an instrument is one of the oldest played in Finland today. It is difficult to prove when kantele was first “invented” because written history is so young. First written texts about kantele are from the 16th century and the oldest preserved 5-string kantele found in Finland is from 1699. Folklorists and linguistic researchers think the kantele is about 2-3 thousand years old. Relatives to kantele-type-instruments are found from around Baltia and Russia.The kantele has an unique status in the Finnish art. The old poems of Finnish national epic “Kalevala” tells a story of a mighty Väinämöinen, an old man, who could do miracles and beat enemies by only just playing the kantele.

My mother taught a kantele group in our little village, so it was natural to join the group when I was about 6 years old. For me the kantele has always been an instrument of my heart because I was always encouraged to make my own music with it. There was not so much composed music to play so it was very easy to start composing already as a child. 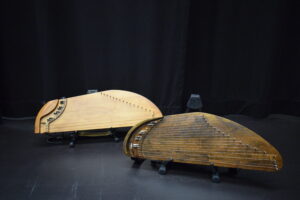 The best thing about playing the kantele is that unique sound and all the different styles that you can use while playing. 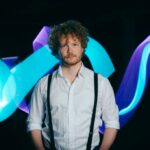 The electric bass was developed in the 40’s—50’s in the USA as a bass counterpart to the electric guitar. It usually looks like an electric guitar but is bigger and most commonly has four strings tuned like an upright bass. The five-string version that I use with Okra Playground has an added low string providing five extra notes. In music the bass often holds the rhythm together with the percussion instruments and plays the lowest notes, serving as the foundation for the harmony as well. Some of the contemporary US-based bassists to grab my attention are Este Haim (Haim), Joe Dart (Vulfpeck) and the YouTuber Davie504. 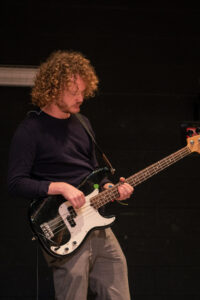 I chose the bass in part by accident: I used to play a bit of guitar in my early teens and was recommended to study bass guitar by my teacher. I noticed I liked the bass a lot and enjoyed the repertoire so it quickly took over as my main instrument. 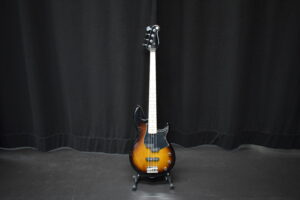 I like a bunch of things about the bass depending on the situation. It’s fun to practice alone, learning new things and noticing the progress. But making music with others — whether in rehearsals, the studio or in front of a live audience — is also absolutely fulfilling and a feeling I haven’t gotten from anything else. 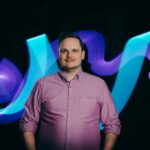 Accordion was developed in 18th century in various European countries. It became popular instrument among dance music around the world because its loud sound, durability and ability to play chords with one hand and melodies with other hands. Accordion name refers to German word “Akkord” (chord) because of the chord system where you can play chords with one finger. There are many types of accordion-type instruments, diatonic, chromatic, made for different music styles or developed in different cultural areas (concertina, bandoneon, bayan, etc.). My main instrument is Finnish five-rowed button accordion with both free bass and chord system (standard bass). In these days you can see accordion in almost any music styles, from traditional music to jazz and from rock bands to modern classical music. 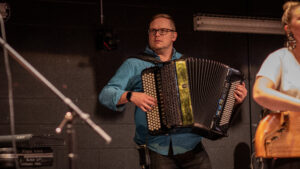 I chose to try accordion when I was young and interested in playing something. Accordion felt interesting because of the button “systems” which you had to learn. At first, learning the system itself felt rewarding and shortly after that I noticed that learning new music became more rewarding. Accordion wasn’t a very popular instrument among kids, but I had really good teachers who introduced all the styles you could play and also let me explore other instruments besides accordion. Eventually I became a music teacher and I play a lot of instruments. With Okra Playground I play also synthesizers. 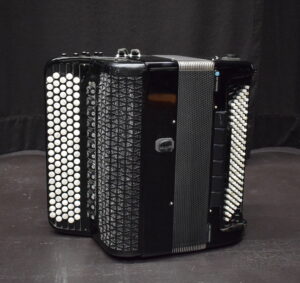 Best thing about playing accordion is playing with other people. Accordion can be a soloist, accompanying instrument or anything between them. I also like the physicality of playing accordion, it’s heavy and it resonates in your body when you play it – it’s like a bellowed big box full of different tones you try to get out of it’s lungs. 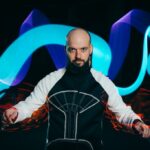 I suppose percussions are the oldest instruments in the world and have always been played all around the world. I started playing a drum set as a kid and later expanded to different percussion from various cultures such as Finnish, Celtic, Latin American and West African. In Okra Playground I play electric percussion and acoustic cymbals. This setup has all the sounds I need in a very compact size. It’s a great setup for travelling abroad. 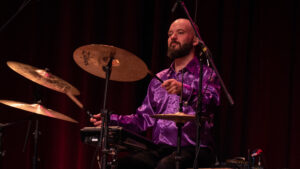 I didn’t really choose my instrument. I have always wanted to be a professional drummer, even as a very small child. I don’t remember how it started and neither do my parents. 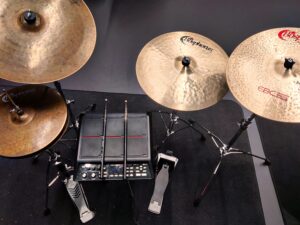 I think rhythm is the most important part of almost any music style. I simply love playing rhythm.